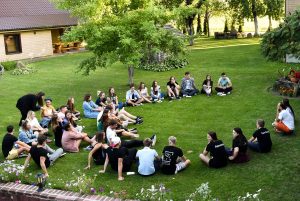 On the 16th to 18th of August, the community of KTU Students’ Association expanded their knowledge on teamwork and leadership in the training session for KTU SA Chairpersons. The weekend was dedicated to various workshops for current and future chairpersons of the faculty subdivisions of KTU SA.

On Friday a trainer for communication and personal effectiveness Robertas Šunokas spoke of emotional intelligence and its’ importance to both the individual and the organisation as a whole. Through a game of “GODOPOCO”, the lecturer helped the participants work on their communication skills, as well as learn self-consciousness and understanding for one another. While playing this and other similar games the participants improved their communication skills, and better understood the importance of feedback while trying to reach their goals.

The participants began their Saturday with breakfast and some exercising, followed by the lecture “Are we one organisation?” by Justina Štrimaitytė, member of the KTU SA Alumni and the manager of organisation strengthening in Lithuanian National Union of Students (LSS). During it, the members of KTU SA identified their personal values and compared them to those of the organisation. Following it was the lecture on goals and how to reach them by the member of VU SA Alumni Julija Lekavičiūtė.

Afterwards, the participants were divided into four teams and competed over which team will finish a puzzle the fastest. Members of a team were not allowed to talk to one another, and the pieces of the puzzle were mixed up through all four teams. During this game, the participants learned to swiftly adapt to new situations and improved their skills of diplomacy and effective communication. The last event of the day was the discussion between the president of KTU SA Augustinas Laimonas Bytautas and the human resources management coordinator of KTU SA Augustas Baltrėnas. The topic of the discussion was leadership; what kind of leaders we are right now versus the leaders we want to be.

Once the workshops and lectures of the day were over, participants were able to share their experiences with the coordinators of the central bureau, the president, and amongst themselves in an informal setting.